During the recent DNV planning workshops and community-organized "bench sessions", both residents and the developer repeatedly stated their strong preference for a "shared space" pedestrian-dominated street running through the middle of the Village Centre, from Fullerton Avenue to Curling Road.  The design of such a street was felt to be critical to developing a true 'village' feel, with vehicles held to low speed and generous amounts of landscaping, creating a street that effectively functions as an extension of the public plaza set at the heart of the Village Centre. 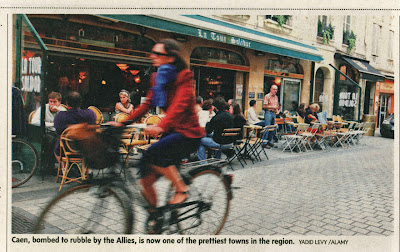 The emerging design for the "woonerf street" incorporates many elements to achieve exactly this effect. As it turns out, the design elements for such a street are not only more pleasant, while still affording vehicle use, they are much safer as well.  Below is an excerpt from an article on the value of independent judgment, "Anarchist Calisthenics" in the December issue of Harper's magazine.

"What would happen if there were no electronic order at the intersection, and motorists and pedestrians had to exercise their independent judgement?  Since 1999, this question has been put to the test with stunning results, leading to a wave of "red-light removal" plans across Europe and the Untited States.  Both the reasoning behind this small policy initiative and it results are, I believe, relevant to other, more far-reaching efforts to craft institutions that enlarge the scope for independent judgement.

Hans Monderman, the traffic engineer who suggested the counterintuitive removal in 2003 of a red light in Drachten, the Netherlands, went on to promote the concept of "shared space", which quickly took hold in Europe.  He began with the observation that, when an electrical failure incapacitated traffic lights, the result was improved flow rather than congestion.  As an experiment, he replaced the busiest traffic-light intersection in Drachten, handling 22,000 cars a day, with a traffic circle, an extended bicycle path, and a pedestrian area.  In the two years following the removal of the traffic light, the number of accidents plummeted to only two, compared to thirty-six crashes in the four years prior to the redesign.  Traffic moves more briskly through the rotary, since all drivers know they must be alert and use their common sense, while backups and the road rage associated with them have virtually disappeared.  Monderman likened it to skaters on a crowded ice rink, who manage successfully to tailor their movements to those of the other skaters. He also believed that an excess of signage led drivers to take their eyes off the road and actually contributed to making the junctions less safe.

Red-light removal can, I believe, be seen as a modest training exercise in responsible driving and civic courtesy.  Monderman was not against traffic lights in principle, he simply did not find any in Drachten that were truly useful in terms of safety, improving traffic flow, and lessening pollution.  The traffic circle seems dangerous - and that is the point.  He argued that when drivers are made more wary, they behave more carefully, and the statistics on "post-traffic light" accidents bear him out. Having no imperative coordination imposed by traffic lights requires alertness - an alertness abetted by the law, which in the case of an accident where blame is hard to determine, presumptively blames the "strongest" (ie; the driver rather than the bicyclist, the bicyclist rather than the pedestrian).

The shared-space concept of traffic management relies on the intelligence, good sense, and attentive observation of drivers, bicyclists, and pedestrians. At the same time, it may actually expand , in its small way, the capacity of drivers, cyclists, and pedestrians to negotiate traffic without being teated like automata by thickets of signs (Germany alone has a repertoire of 648 distinct traffic symbols, which accumulate as one approaches a town) and signals.  The more numerous th eprescriptions, the more drivers have been impelled to seek the maximum advantage within the rules: speeding up between signals, beating the light, avoiding all unprescribed courtesies.  Drivers had learned to ru nthe maze to their maximum advantage.  The effect of Mondermans's paradigm shift in traffic management was euphoria.  One small town in the Netherlands, put up a sign boasting that it was FREE OF TRAFFIC SIGNS (Verkeersbordvrij), and a conference discussing the new philosophy proclaimed: "Unsafe is safe."
Posted by Email us at 23:24